Arm manufacturers have tried to compensate for this force, but that is impossible because the force is constantly changing as the music and velocity change.

VPI has conducted careful listening tests and determined that every tonearm they tried sounded better with its mechanical anti-skating disabled and the tracking force very slightly increased... VPI has a unique solution to anti-skating: the coiled wire of the JMW Memorial Tonearm acts as a spring and pushes the arm back without affecting the sound quality. The VPI JMW-10.5i Tonearm Anti-Skate Upgrade now gives you the option of a mechanical anti-skate device!

If you have older VPI turntable/tonearm combo that has "silver" junction box, a new "black" junction box would need to be purchased to use the anti-skate upgrade.

Directions on how to install:
 The anti-skate mounts on the black junction box by removing the left front side screw using a #2 Phillips screwdriver and screwing the anti-skate mechanism into the now vacant hole. Tighten the nut once you have the shaft screwed all the way in. 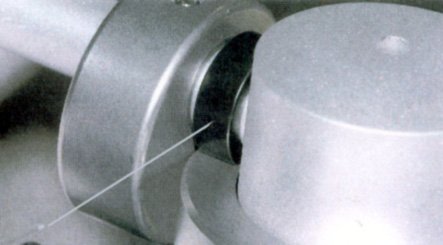  Loop the line around the post with the multiple grooves and adjust the height of the anti-skate. When you are done the line should be level when the arm is resting in the armrest.

 You can adjust the anti-skate by either moving the circular rubber rings away from the pivot (more force) or closer to the pivot (less force).

 You no longer have to twist the lead out wire from the arm to the junction box to set anti-skate, just plug it in directly with no twist.