This product can only be shipped to U.S. addresses.

The Audioquest DragonFly Black features Beautiful Sound from ANY Mobile Device or Computer!
The Medium Output (1.2 volt) DragonFly Black is a USB DAC + Preamp + Headphone Amp all in one small, portable device!

"I started listening to the Black with a set of Grado RS-1e full-size headphones, and it was the overall clarity of the sound that took centerstage. I felt like I was hearing deeper into the mixes of familiar recordings. The purity of the sound was addicting, so each instrument and vocal stood in bold relief. The RS-1e sounded like a higher resolution 'phone than I thought it was... AudioQuest is on a roll, so the DragonFly Black and Red are easy to recommend to audiophiles seeking better sound, without spending a lot of cash." - Steve Guttenberg, www.cnet.com

Hard to believe! 2016 marks almost four years since the original DragonFly (v1.0) changed the worlds concept of what a DAC could and should be. At only $249, but with expensive component-quality performance, DragonFly was hailed around the world as the perfect introduction to the pleasures of high-performance audio.

"The Original DragonFly was a groundbreaking product. the DragonFly Black continues this commitment ot better sound quality on a budget, but in an even more impressive package." - What Hi-Fi, 5 Stars

A year and half later, DragonFly rocked the audio world again when Audioquest introduced the updated v1.2  for only $149. The sound was simply a little cleaner, a little better controlled, and more relaxedunequivocally better. And, the new price helped bring better-sounding music to even more people.

Now, AudioQuest is truly pleased to introduce a dramatic step forward  DragonFly Black with unprecedented audio quality and even higher performance-to-cost ratio  and, drum roll, it works with Apple and Android phones! 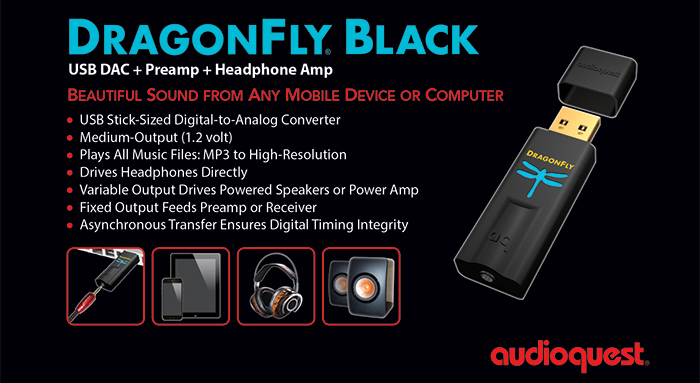 Yes, that last point is a biggie. From the day that the original DragonFly came out, Audioquest received requests for a DragonFly-quality DAC to use with smartphones. Finally, thanks to newly available parts, power draw is now well within what any phone will authorize.

"DragonFly Red and Black are the finest examples of everyman hifi to ever grace these pages. Their value quotients explode the dial." - John H. Darko, www.digitalaudioreview.net

Audioquest hesitates to brag about specific electronic parts in the DragonFlys because the implementation of those parts is as crucial as their quality. Please dont make the mistake of thinking that DACs with the same microcontroller or primary processor all sound alike! Depending on the circuit design, control of noise, power supply regulation, quality of the many passive parts, etc., a supposedly lesser DAC chip can easily outperform a better DAC chip in a different DAC.

Also, as with cameras and their previous race to have more pixels than the other guy, playing the numbers game can distract and deceive. While the DAC chip in the Black DragonFly has great capability, AQ has chosen to limit processing to 24-bit/96kHz. This makes using the DragonFlys as simple as its always been, fully compatible with PCs, etc., without having to download and install new drivers. Though maybe more importantly, faster processing can mean more noise, so while playing 24/192 files with some of the best component DACs does offer sonic advantages, many DACs actually sound better when the computer down-samples a 24/192 file to 24/96 before sending the data to the DAC. AudioQuest plays a music-quality game first and foremost. The DragonFly Black is designed to be the-best-it-can-be Emotional Transportation for your music, whether Spotify, YouTube videos, Tidal, ripped CDs, or state-of-the-art Hi-Res files.

The DragonFly Black outputs 1.2 volts  enough power to capably drive all preamplifier input circuits and all reasonably efficient headphones. For reference, DragonFly 1.0 and 1.2 featured 1.8-volt output. (The difference in maximum output between DragonFly Black and Red is essentially irrelevant with the AQ NightHawk headphones, as they can be easily driven by either model.)

And, more good news: The new DragonFly Black is software upgradeable through complimentary Windows and OS X desktop applications. As new developments arise in music player applications, streaming protocols, or other associated software, DragonFly users will be able to incorporate those updates into their existing devices.