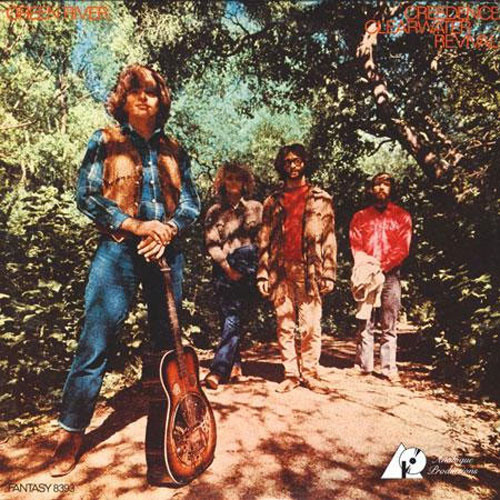 By the summer of 1969 Creedence Clearwater Revival was firmly ensconced as the American dance band, continuing to churn out hugely-successful hit singles, four of which are on this album (released August 1969). The title cut Green River, along with Commotion, Bad Moon Rising and Lodi, were Top Ten singles in the classic rockabilly/ R&B tradition and together made this LP the group's first No. 1 album on the Billboard charts. Because of a penchant for developing tight, carefully crafted material before entering the studio, CCR recorded Green River in an astounding two-and-a-half days, after which the LP remained on the charts for 88 weeks, earning the group its second platinum LP.

"I've just listened to the first two CCR test pressings. . . and let me tell you: when the bass kicked in on "I Put A Spell On You" I thought I was playing a 45 at 33.3 it was so deep and thick but it was 33.3 and when the guitars kicked in it was WOWIE!!!!!!!!!!! The transparency, transient snap and overall clarity without brightness or edge is phenomenal!" - Michael Fremer (Stereophile Magazine)

"The third Creedence Clearwater Revival album was their first classic LP, a tightly wrapped package of blistering guitar, roadhouse-rhythm snap and John Fogerty's backwoods howl. The lengthy jamming on CCR's previous LPs is gone, and Fogerty has found his lyrical voice  radio-ready essays in frontier living ("Green River," "Lodi") and working-stiff politics ("Bad Moon Rising," "Wrote a Song for Everyone"). As producer, he makes it all sound so gritty and easy, too  like CCR had cut it all in a toolshed. "All this overproduction is funny to me," Fogerty has said. "It doesn't make it mo' betta when you add more junk." - www.rollingstone.com

"'This song [Bad Moon Rising] is definitely not about astrology,' Fogerty once joked. '[Its] scary, spooky stuff.' With violence at home and a war abroad, there was a bad moon on the rise, and CCR effortlessly tapped into the darkening national mood. The song had one of CCRs catchiest swamp-rock riffs, an homage to Elvis Presleys guitarist Scotty Moore that Fogerty wrote in high school." - Rolling Stone