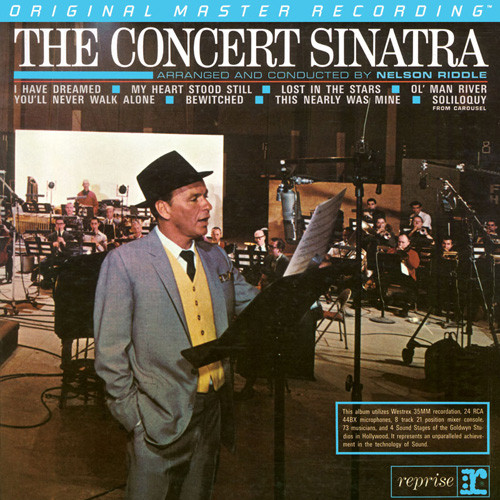 Featured in Michael Fremer's Heavy Rotation in the October 2011 Issue of Stereophile!

Half-Speed Mastered from the Original Master Tapes: Wait Until You Hear the Dynamic Range

Just how good is Frank Sinatra's The Concert Sinatra? Take it from an expert no less than the Chairman's own daughter, Nancy, who in 2003, weighed in on the set by unequivocally stating: "THE finest collection of his career. With Dad's collection, it's always difficult to pick a favorite song but a favorite album is a slam-dunk. This is not only Dad's finest but one of the finest ever in the history of recorded music."

Miss Sinatra couldn't be more on-the-nose. Recorded onto 35mm film in 1963 at the Goldwyn Studios Soundstage, the record pairs the Voice with longtime collaborator Nelson Riddle and a gigantic orchestra. Consequently, the album's name refers not to a live performance but the music's epic grandness and the orchestra's huge size. Captured over four sessions in four days, the undertaking involved upwards of 60 musicians.

Thematically, half of the album features Rodgers and Hammerstein compositions while the other half also pulls from popular Broadway shows. True to the theatrical adage of leaving the audience wanting more, The Concert Sinatra will have every listener wishing it lasted forever. Everything here is utterly magnificent. Using his unparalleled breath control techniques and in the best voice of his career, Sinatra matches Riddle's sweeping arrangements, turning in resplendent performances that are as powerful, majestic, and dynamic as Riddle's surging instrumental support.

A number of pieces here  the delicate romanticism of "Bewitched, Bothered and Bewildered" and tremendously poignant "Soliloquy"  are commonly cited by Sinatraphiles as among the greatest work Sinatra ever did. But nothing tops the definitive version of "Ol' Man River," revered for the way Sinatra holds the notes, phrases the syllables, and brings the standard's goosebump-inducing emotion to the fore. It's as perfect of a song as you will ever hear.

And hear it you will, with unprecedented clarity, transparency, and detail, on Mobile Fidelity's 180g LP. Mastering from the original tapes, Mobile Fidelity engineers realized how beloved The Concert Sinatra is to music listeners around the world. They invested tremendous care and effort in maximizing every opportunity to draw as much richness, verve, and range as possible from the source material.

So whether you have a later-era 1970s LP pressing, any of the CD versions (including the 2009 remaster), or even a rare 1960s original LP, this edition is the one to own. And if you don't own a copy  well, here's your chance to experience what's possibly the greatest pop album ever made. Prepare to have shivers run down your spine.