THE SOUND:
Mono or Stereo? Rudy Van Gelder first began recording Blue Note sessions in stereo in March of 1957. From then until an October 30, 1958 Art Blakey session, Rudy simultaneously ran both mono and stereo session tapes. The stereo presentation revealed more air, more detail and more sheer life than the mono. The mono playback was a wonderful remembrance of the old LP we all knew and loved. The stereo playback from the original masters was eerie. It was like going back in time to that day in Rudys studio. Quite simply, the stereo masters revealed more of what it was like to be there that day.

Why 45rpm? Simply...Because it sounds better! 180 gram pressings versus 200 gram? Music Matters, Lt. uses 180 gram pressings for the simple reason that they believe 180 gram weight is more than sufficient to provide a near perfect pressing. When Music Matters asked their friends at Record Technology Inc. for their recommendation to achieve the highest possible quality pressings their answer was unequivocal... go with 180 gram!

Upgrading Connections at Acoustech! It goes without saying that there are many controversies and debates in the perfectionist audio/LP collector market. But one area of near universal agreement is the quality of mastering that emerges from Kevin Grays custom-built AcousTech Mastering studio in Camarillo, CA. Kevin, along with Steve Hoffman, has provided many of the best sounding new and reissued albums on LP during the last 5 or 6 years working outs of AcousTech.

THE JACKETS:
Music Matters Exclusive! Music Matters strongly feels that these Blue Note recordings deserve nothing less than the finest graphic presentation. The Music Matters Definitive 45RPM Blue Note jackets are designed to last a lifetime, using ultra-durable extra thick cardboard stock and thick, luxurious lamination... quality youll be able to feel in your hand the moment you pick up one of these albums. In addition, Music Matters has obtained exclusive access to a treasure trove of over 30,000 original Blue Note session photos from Mosaic Images for use in this series. The gatefold opens to display these session photos in stunning high resolution - four times sharper than original Blue Note jacket photos.

THE REVIEWS:
Hear what Michael Fremer, Wayne Garcia and others are saying about the Blue Note Definitive 45rpm Reissue Series from Music Matters, Ltd:
"Theyre BIG and open and definitely work in stereo because theyre not hard left/right stereo. The cymbals are so "chimey" and the skins so open! Even Rudy's typical boxy piano isn't too bad. These are going to be really good....!!!! (Real time reaction after hearing his first test pressing of Horace Parlans Speakin My Piece LP.)" - Michael Fremer, Stereophile Magazine

"Ive heard a lot of Blue Note originals and myriad reissues over the years, but based on the sample test pressings heard so far, noneand I mean noneconvey the intensity of living, breathing music-making the way the Music Matters Blue Note series does. The sense of air, texture, and dynamic pop in these grooves is astonishing." - Wayne Garcia, The Absolute Sound

"Art Blakey & the Jazz Messengers The Big Beat and Horace Parlan, Speakin My Piece. And if this is any indication of whats to come, I advise you to get on the list now, before this collection is sold out." - Albert Porter, www.positive-feedback.com

"The Music Matters 45s have all immediacy and add a free-flowing naturalness that is surprising at first but very easy to get used to." - Marc Mickelson, www.soundstage.com

Horace Parlan had his greatest band in 1960 when he teamed up with bassist George Tucker and drummer Al Harewood. The trio's communication was so telepathic that they often sounded like one mind playing three instruments. Parlan's gentle yet hard-swinging chordal style had gained passion and intensity during his two years with the always demanding Charles Mingus. The memorable brand of bluesy soul jazz played by Parlan's trio was infectious and irresistible, with their Blue Note recordings finding the classic group at its zenith. Inspired on Headin' South by the addition of Ray Barretto's congas, the group's soulful interpretations of superior standards and originals sound unlike any other ensemble. In addition Headin' South, one of Horace Parlan's greatest recordings, is heard for the first time in such brilliant and impeccable sound.

"The albums are being cut at 45 RPM for maximum quality by Kevin Gray and me using our full ANALOG disk cutting system; most studios cannot even cut vinyl in 100% true analog anymore (they convert to digital first) but we can. The original Rudy Van Gelder engineered stereophonic session tapes are used when we master these gems. The sound quality is amazing on our test cuts. Like from heaven. First totally uncompressed versions of these jazz classics that Ive ever heard and trust me, you will be impressed; they sound like no other releases of this music."

"The sound is lifelike, the horns are in the room with you. Our non-invasive mastering insures the true breath of life on these original Van Gelder session tapes is transferred to the virgin vinyl with absolute authenticity. It is like hearing these BLUE NOTE masterpieces for the first time and that is NO exaggeration. When we heard the first lacquer acetate playback from our first mastering session I thought Joe Harley was going to pee in his pants he was so excited. Actually we all were; after 50 years of many lackluster and some downright bad sounding versions of these albums, hearing the real deal is a humbling experience, even for us hardened music veterans. You will be able to listen to the music exactly like we did..." - Steve Hoffman 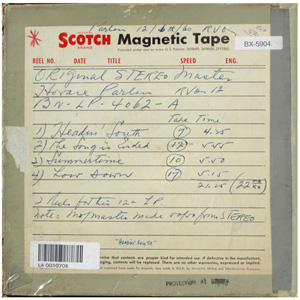 Horace Parlan On The Spur Of The Moment 180g 45rpm 2LP