TAS Recommended! Rated a 'Best Audiophile Label Recording' in the November 2009 issue of The Absolute Sound!

"This is the definitive version of this top 10 audiophile LP of all time!"

Mastered by Steve Hoffman and Cut by Kevin Gray from the original non Dolby master tapes for the first time ever!

"With song after song of regrets and sorrow and a smoky-blue cover shot of Mitchell on the edge of tears, this may be the ultimate breakup album. Its whispery minimalism is also Mitchell's greatest musical achievement. Stephen Stills and James Taylor lend an occasional hand, but in "California," "Carey" and "This Flight Tonight," Mitchell sounds utterly alone in her melancholy, turning the sadness into tender art." - www.rollingstone.com

"Sad, spare, and beautiful, Blue is the quintessential confessional singer/songwriter album. Forthright and poetic, Joni Mitchell's songs are raw nerves, tales of love and loss (two words with relative meaning here) etched with stunning complexity; even tracks like 'All I Want,' 'My Old Man,' and 'Carey'  the brightest, most hopeful moments on the record  are darkened by bittersweet moments of sorrow and loneliness."  All Music Guide 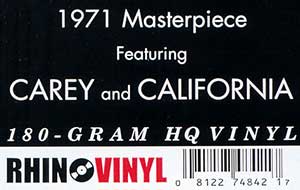 Joni Mitchell Love Has Many Faces: A Quartet, A Ballet, Waiting To Be Danced Numbered Limited Edition 180g 8LP