The 1972 Hard Rock Classic featuring "Smoke on the Water" and "Highway Star", mastered by Kevin Gray at Acoustech Mastering on 180 gram HQ vinyl! 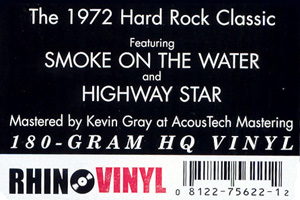 "Keyboardist Lord claimed that the working title for this song was 'Durh Durh Durh'  a transliteration of the riff that some beginner guitarist is probably trying out for the first time right now. The lyrics tell the story of a fan shooting a flare gun during a 1971 Frank Zappa show at the Casino in Montreux, Switzerland, setting the venue ablaze." - Rolling Stone